In 1892, H.A. Clements opened a grocery store on the south-western corner of Catherine and George Streets in Windsor. The store was popular and a great financial success for the Clements family, selling everything from ‘prime pickled pork, hams, bacon, fresh lard’ to ‘groceries of top quality at bottom prices, crockery always on hand and farm produce at lowest market prices’.

Percy Clements married Violet Amelia Hammond in 1923, Dorris married Bertie Milsim Hornery in 1928 and Carl (known as Mick) married Mona Mary Williams in 1950. The Clements family members were all musical. H.A. ‘Pop’ Clements, sons Perc and Carl and Bert Hornery played in the Windsor Band, while Dorris played piano and organ at the Presbyterian Church in Windsor for many years. Cousins, Harry and Colin (Bubs) Gardiner also played in the band. Miriam (known as Clarice) did not marry. She suffered ill health for many years and died in 1954.

H.A. and Mary Ann Clements were in the grocery business for thirty-seven years before they retired to the new home they built at 7 Macquarie Street, Windsor. They called the house ‘Hermar’ derived from their first names of Herbert and Mary. This area of Windsor, close to The Peninsula and Thompson Square, became a hive of activity for the Clements family. Perc and Vi Clements lived nearby at 21 Bridge Street, Bert and Dorris Hornery lived across the way at 46 Court Street in the brick home they built in 1928. 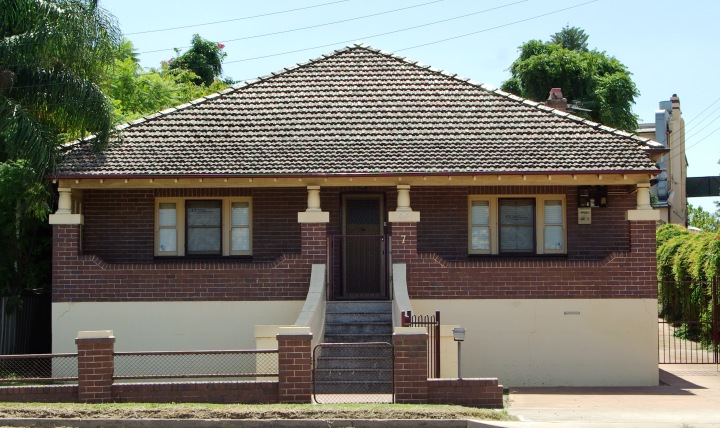 Also in 1928, Carl Clements opened the Hawkesbury Motor Garage on George Street facing Thompson Square. The garage became a family business and an icon in the town: Perc Clements went to work for his brother Carl, who was the proprietor, and they were joined by their brother-in-law and my uncle, Bert Hornery, a motor mechanic who later ran his own refrigeration business just down the road.

Mary Ann Clements died in 1934 and Herbert Australia Clements died in 1957. They are buried in the Presbyterian Cemetery in Windsor with their daughter Miriam. The dark brick, solid, substantial brick homes the Clements family built in Macquarie and Bridge Streets and the Californian Bungalow built by Bert and Dorris Hornery on the corner of Bridge and Court Streets still stand, as solid as when they were built nearly one hundred years ago. They are prime examples of the late 1920s/early 1930s architectural style which forms part of the heritage landscape of Windsor and other areas of the Hawkesbury. 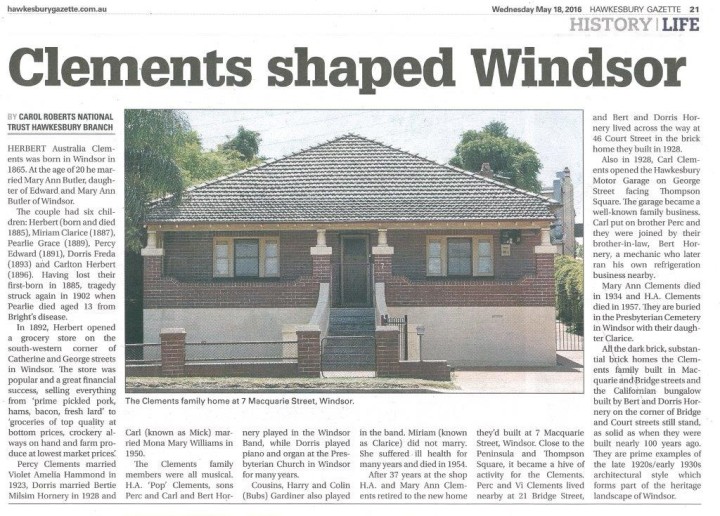 NSW Registry of Births, Deaths and Marriages, http://www.bdm.nsw.gov.au/Pages/family-history/family-history.aspx, accessed 2 May 2016.

Photograph of H.A. Clements from his granddaughter June Irving and great-granddaughter, Julie Sinfield.