A popular outing for members of the Royal Motor Yacht Club through the 1930s was a trip up the Hawkesbury River to Sackville, and one member who visited more often than most was the Commodore of the RMYC, film and radio entrepreneur Stuart Frank Doyle, in the Miramar.

Stuart Doyle and his wife, Louise, were regular visitors to the Hawkesbury and the Miramar had a permanent mooring at Sackville. Each time the couple visited, Louise Doyle planted shrubs and trees on the river bank such as jacarandas, flame and coral trees, wattles, flowering gums and ornamental vines.

The luxurious Miramar, which was launched in late 1925, had several trips up the river before it was destroyed by fire in Rose Bay in 1928. Her replacement was the Miramar II, the flagship of the Royal Motor Yacht Club of NSW, built at a cost of 12,000 pounds and launched on Saturday, 15 March 1930. This twin-screw, two-decked cruiser was 23 metres long and weighed 68 tons. All timber used in the keel and floor stringers was Australian spotted gum and the planking was New Zealand kauri. The interiors were of Queensland maple, walnut and sycamore and were luxuriously appointed. The yacht had two Hall-Scott 200 hp engines, each doing 1,800 revolutions a minute. 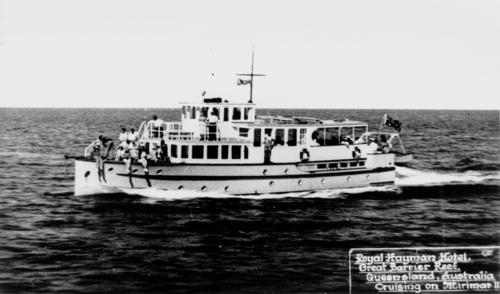 As the engines on early motor yachts needed constant maintenance, a motor mechanic from Windsor, Bert Hornery, was often called on to work on the engine of Miramar II when she was on the Hawkesbury River, as shown in the photograph. Bert, who started the business of Murdoch and Hornery in Windsor, became manager of Hawkesbury Motor Garage in 1925 before starting his own business, B.M. Hornery, Radio and Refrigeration Service.

In 1937, a RMYC fleet of 32 cruisers visited Sackville on Easter Saturday for the first time. After a day of races on the river, the boats gave a searchlight display at night which was described as ‘a truly glorious sight’, followed by a dance with music provided by Keller’s Orchestra. The RMYC members promised to return the following year, but these plans were put aside with the approaching threat of war.

The Miramar II was taken over by the RAN during World War II and used as a patrol boat and submarine chaser. After the war ended, and with the death of Stuart Doyle in 1945, she was acquired by J. J. Waterford and Bill Passau, who were going to use the luxury yacht for pleasure cruises on the Hawkesbury River. Unfortunately, this did not eventuate as the yacht broke from its moorings in Kogarah Bay during a gale and washed up on rocks at Carss Point. It was then bought by Pioneer Tours Ltd (Ansett) and completely refitted to take passengers on regular tourist cruises on the Great Barrier Reef.

I completed the basis of this article for the Hawkesbury Gazette published on Wednesday 31 October 2018 for Colo Shire Family History Group as ‘Doyle’s pride and joy afloat’.

Information about Bert Hornery from his niece, Carol Roberts.