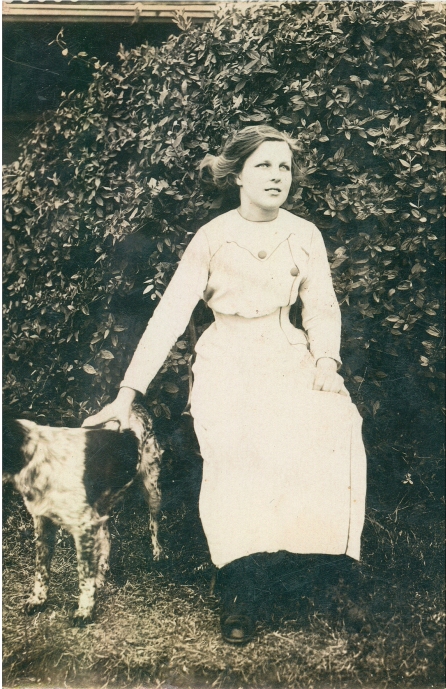 Photograph of Myra McCabe courtesy of Carol Roberts from the Iris Cammack Collection.

As well as letters, one of the most popular forms of communication between families during the early 1900s was the privately-printed postcard. Postcards were introduced into Australia from about 1875 and twenty years later, the Victorian Government gave permission for privately-printed postcards to be used under the conditions that they be made of ordinary cardboard, measure no more than 13.3 x 8.3 cms and nothing except the address, stamps and a brief message could be included. From 1898, the NSW Government Printing Office released a series of pictorial postcards with a pre-printed stamp and an image on the front. These early postcards had an undivided back, which meant the message often had to be written next to the picture.

In 1905, the Australian Postal Service allowed the printing of postcards with a divided back allowing the address, stamp and message to be included on one side while the photographic image took up the other side. Enthusiasm for sending/collecting postcards lasted throughout the years of World War I into the 1920s.

The attached photographic image, printed on an Empire postcard with the Empire logo of a lion and a kangaroo on either side of a tripod camera, was sent to her auntie Charlotte Isabel Hornery on Christmas Day, 25 December 1912, by Myra McCabe of Kurrajong. The Empire brand of postcards were distributed by the Empire Works Company, 57-59 George Street (North) in Sydney by Harringtons Ltd.

Myra was fifteen years of age at the time and she wrote: ‘To Dearest Auntie wishing her a Merry Xmas and a Happy New Year, with love from Myra.’

The youngest daughter of John Edward and Alvina McCabe (Hornery) of Slopes Road, Kurrajong, Myra can be seen in the photograph with the family dog. The corrugated iron roof of their house can be seen in the photograph. Her uncle and aunt, William Matcham and Charlotte Hornery (Clarke) lived nearby on Blaxlands Ridge Road and the families often spent Christmas Day together at the McCabe house. Alvina McCabe was the daughter of Margaret Hornery and partner William Pitt Wilshire of Kurrajong and granddaughter of Peter and Catherine Hornery (Carroll) and James and Esther Wilshire (Pitt). 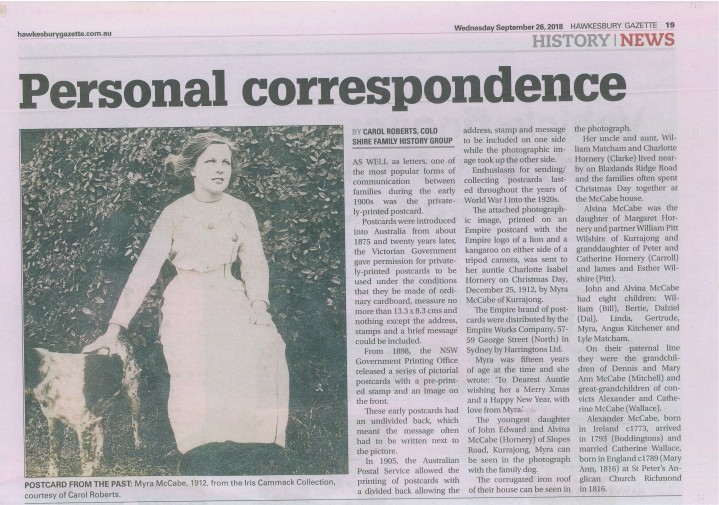 I completed the basis of this article for the Hawkesbury Gazette published on Wednesday 26 September 2018 for Colo Shire Family History Group as ‘Personal correspondence’.