In early 1931, Guy Lambton Menzies took off from Mascot in an Avro-Avian aircraft (the Southern Cross Junior), flew solo across the Tasman Sea and landed upside down in a swamp near Hokitika on the South Island of New Zealand in the record time of eleven hours and forty-five minutes. Just 21 years of age, the intrepid aviator was an experienced pilot with more than 800 hours in his logbook.

When I first started my research on Guy Lambton Menzies I had no idea his family had significant family connections with the Hawkesbury area, other than the name ‘Lambton’ that caught my eye in an old newspaper article and I knew that name from previous research into Guy’s great-grandfather, pioneer Scottish settler and solicitor Stephen Lambton. At the time I was interested in Menzies’ flying achievements and possible connections with the RAAF Base at Richmond.

As I put together the pieces of Guy Lambton Menzies’ family tree, I discovered the Lambton connection on his maternal line. As I delved further and further into the family history I found that Guy’s great-grandfather, Stephen Lambton, acted as a solicitor in Sydney, Bathurst and Parramatta before settling in Windsor, where he died on 16 June 1851 aged 42. He is buried in St Matthew’s Anglican Cemetery in Windsor.

The solicitor Stephen Lambton was born on 25 February 1809 to Arthur and Mary Ann Lambton and was baptized in the Parish Church of St Andrew’s in Norwich in the County of Norfolk. By the age of 23 in 1832 he was listed on the electoral register of Edinburgh in Scotland as a ‘writer’.  He was recorded as an apprentice to William Renny, Solicitor and Member of the Royal Society of Edinburgh and on 11 July 1833 was admitted to The Society of Writers to His Majesty’s Signet in Edinburgh. On 4 December 1833, Stephen Lambton married Frances Elizabeth, second daughter of Major George Brown of the 4th Dragoons.

Stephen and Frances Elizabeth Lambton arrived in Australia from England with two children in October 1838. The immigration record does not include the names of the children but one was Stephen Harbord Lambton, born November 1834, a former NSW Deputy Postmaster-General. Stephen Harbord Lambton attended a school in Windsor run by the Reverend Mathew Adam. He married Laura Susette Bell in 1863 and their daughter, Ivy Mabel Lambton, married Dr Guy Menzies and they lived at Aberfeldy in Drummoyne. Ivy and Guy were the parents of Guy, Ian, Betty and Bruce Menzies (all had the name Lambton included as a middle name).

Guy Lambton Menzies possibly inherited his adventurous spirit from his great-great-grandfather, the pioneer Hawkesbury settler Archibald Bell who founded the estate known as Belmont at North Richmond. [For more information on the history of the property called Belmont see Carolynne Cooper’s book From Heartache to Healing: The Story of Belmont. For more information on Archibald Bell see Neil Renaud’s book Archie: The Story of Archibald Bell, both produced by Colo Shire Family History Group.]

There were many other connections with the pioneering days of the Hawkesbury. Menzies’ maternal great-grandfather, William Sims Bell, who explored the Hunter region in 1820, was a son of Archibald Bell. Another son, Archibald Bell Jnr, set out from Belmont in 1823 and established the route across the Blue Mountains that became known as Bells Line of Road. In 1833 Archibald Bell Jnr married Frances Ann North, the daughter of Samuel North, magistrate in Windsor. Another great-great-uncle, James Thomas Bell, was also a magistrate in Windsor and Menzies’ great-great-aunt, Maria Bell, was the third wife of the prominent Hawkesbury settler, William Faithfull. Elizabeth Bell, another great-great-aunt, married George Cox in 1822, the son of pioneer Hawkesbury farmer and builder William Cox.

Menzies had a reputation for being a daring and courageous young man. He frequented the motorcycle speedway, competing and winning races under the name of ‘Don McKay – The Flying Scotsman’. When Menzies became friends with the land speed ace, Norman Leslie (‘Wizard’) Smith, it is more than likely that he would have been a frequent visitor to the airfield at Richmond as Smith had been brought up on a farm in the area. A fortnight before his memorable flight across the Tasman, Menzies bought Southern Cross Junior from Charles Kingsford Smith for 750 pounds. With his friend ‘Wizard’ Smith and the backing of aviation enthusiast, Albert E. James, he was making plans for a flight to Japan. It was agreed that a test flight to Perth would be a good practice run for the Australia to Japan trip, but letters left by Menzies for close friends and family after takeoff on 7 January 1931 indicated that he had been meticulously planning his flight to New Zealand for many months.

After joining the Royal Air Force at the beginning of World War II, Squadron Leader Guy Menzies was killed on 1 November 1940 when his Sunderland aircraft was shot down by Italian fighters over the Ionian Sea during a reconnaissance mission. His brother, Flying Officer Ian Lambton Menzies of No 24 Squadron RAAF, was killed on 18 April 1941 in a Wirraway crash in North Queensland. Menzies Reserve, near the family home in Drummoyne, was named in honour of Guy and Ian Menzies. 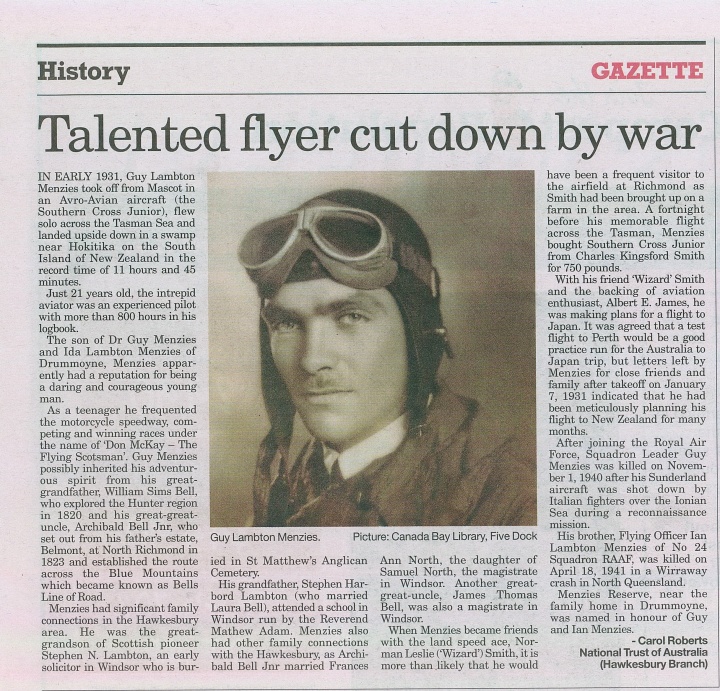 A version of this article written by me appeared in Hawkesbury Gazette, 15 November 2015, for National Trust (Hawkesbury Branch).

For more information about Guy Lambton Menzies visit the National Library of Australia blogpost, Guy Menzies: A Rebel at Heart, https://www.nla.gov.au/stories/blog/behind-the-scenes/2019/07/23/guy-menzies-a-rebel-at-heart?fbclid=IwAR1z4OdYkf-_Amp9rIutVwq5Arq2Usk3qIlD-fJatgJAfAJvdU6HEWVehg8 which can also be accessed through the National Library of Australia Facebook site posted on 30 July 2019.