The importance of research, documentation and conservation in regard to objects in museum or private collections cannot be over-estimated. To explain that importance, I’ve chosen to carry out qualitative research on a sample of three items from my family collection.

The significance of the first item chosen for this post, the scrapbook, is that it belonged to my great-aunt, Mrs Minnie Clarke (née Lamond) [Auntie Minnie], who was an early twentieth century concert singer (a mezzo-soprano). Auntie Minnie’s scrapbook, dating from 1908 to 1924, was given to me by a cousin, Jean Welch (Minnie Clarke’s daughter), who died recently aged 93 years.  It is an important collection of primary sources reflecting musical culture in the Hawkesbury area.  Separate newspaper articles dated 10 and 17 July 1931, concerning the death of Minnie Clarke’s father, John Lamond, a ‘picturesque personality’, are included with the scrapbook.

The scrapbook could be used as a focus for different stories, such as tracing the history of musical activities in the local area, tracing the story of Minnie Clarke and her contribution to those activities as a performer, tracing the history of St Joseph’s Convent School or researching the life and times of John Lamond (‘Jack the Barber’) in the Windsor area. Interestingly, Minnie continued singing in concerts after her marriage and while her two daughters were quite young. Her career was cut short after she developed tuberculosis in the mid-1920s, although she recovered after receiving treatment in a sanitorium in the Blue Mountains and lived to the age of 95 years. In a museum situation, the extent that objects can tell a story is limited by placement and by the knowledge gained about the object from the current owner, so it is extremely important to document as much information as possible. In relation to Auntie Minnie’s scrapbook, it has been shown that many stories and local memories could originate from the contents. 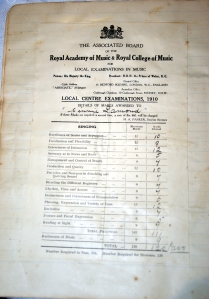 Photograph of Minnie Lamond’s results from Royal College of Music, 1910, while a pupil of St Joseph’s Convent in Windsor NSW.

The scrapbook and newspaper articles are in very poor condition, but further deterioration could be slowed with the use of conservation processes such as enclosing each page between Mylar film and then storing flat, away from ultra-violet light, or interleaving with acid-free tissue paper. Framing is another method for storage and display, provided UV-absorbent perspex is used to limit the amount of ultra-violet light.  Factors such as pollution from dust, dirt and insecticides, mould, insect attack, light, temperature, humidity and handling can all damage paper and increase the rate of deterioration.

People can only fully appreciate the scope of an object if it is possible to see and feel that object, rather than just looking at pictures in a book.  That is why it is important to document and conserve objects in museums and in private collections. Supporting documentation is essential to enable correct interpretation and to understand the social history of an object and how the owners thought or expressed themselves.  Keeping records enables correct interpretation and as the distinguished historian and museum academic Gaynor Kavanagh suggests, keeping ‘objects as evidence’ can ‘unlock and reveal’ how previous generations lived.

With a rapidly emerging renewed interest in factual Australian history, it is extremely important that museum curators and private collectors recognise that careful research, documentation, conservation and interpretation of objects is becoming increasingly important in the twenty-first century as objects tell the story of how people lived and how they coped in their daily lives. My next post will document the significance of my mother’s Mignon piano as I try to trace the history behind the manufacture and distribution of pianos in the early 20th century.